Between Skies and Earth 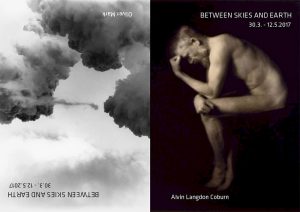 The light and the obscure, the sky and the earth, the eth­er­e­al and the cor­por­eal. Such jux­ta­pos­i­tions have long formed the essence of the photographer’s art and a mas­tery of these ele­ments can evoke entire uni­verses of nuance and emo­tion.
Oliv­er Mark (b. Ger­many, 1963) is one of the mod­ern geni­uses in the use of these ele­ments; and Alv­in Lang­don Coburn (b. Amer­ica, 1882; d. Wales, 1966) pos­sessed such a gift in their use that his work forms the found­a­tion of pictori­al­ist pho­to­graphy. CLAIR Gal­lery cur­ated an exhib­i­tion, Between Skies and Earth, that explored the overt and cov­ert con­nec­tions between these two cel­eb­rated pho­to­graph­ers who are sep­ar­ated by more than a century.

Oliv­er Mark is renowned for his por­traits of aris­to­crats, artists, and celebrit­ies. His work has been pub­lished in magazines such as Vogue and Van­ity Fair, while his pho­to­graphs have been exhib­ited in museums around the world. More inform­a­tion avail­able at his artist page or  on his per­son­al website.Alvin Lang­don Coburn was a pion­eer­ing fig­ure in pho­to­graphy and an early mas­ter of pictor­al­ism. He began tak­ing pho­to­graphs as a young child and his career spanned more than six dec­ades. His work bears wit­ness to the rise of the great mod­ern cit­ies and he was fas­cin­ated by the dynam­ic com­plex­ity of these new urb­an envir­on­ments. Coburn had a par­tic­u­lar geni­us for pho­to­graph­ing move­ment, wheth­er it be the eer­ie play of arti­fi­cial and nat­ur­al light at night­fall in New York City or the traces of ped­es­tri­ans seen from a perch high above a Lon­don park. To see more of his work, vis­it his CLAIR artist

Exhibition Views
We use cookies on our website to give you the most relevant experience by remembering your preferences and repeat visits. By clicking “Accept All”, you consent to the use of ALL the cookies.
Cookie SettingsAccept All
Manage consent

This website uses cookies to improve your experience while you navigate through the website. Out of these, the cookies that are categorized as necessary are stored on your browser as they are essential for the working of basic functionalities of the website. We also use third-party cookies that help us analyze and understand how you use this website. These cookies will be stored in your browser only with your consent. You also have the option to opt-out of these cookies. But opting out of some of these cookies may affect your browsing experience.
Necessary Always Enabled
Necessary cookies are absolutely essential for the website to function properly. These cookies ensure basic functionalities and security features of the website, anonymously.
Functional
Functional cookies help to perform certain functionalities like sharing the content of the website on social media platforms, collect feedbacks, and other third-party features.
Performance
Performance cookies are used to understand and analyze the key performance indexes of the website which helps in delivering a better user experience for the visitors.
Analytics
Analytical cookies are used to understand how visitors interact with the website. These cookies help provide information on metrics the number of visitors, bounce rate, traffic source, etc.
Advertisement
Advertisement cookies are used to provide visitors with relevant ads and marketing campaigns. These cookies track visitors across websites and collect information to provide customized ads.
Others
Other uncategorized cookies are those that are being analyzed and have not been classified into a category as yet.
SAVE & ACCEPT